The Binns Organ Trust is delighted to present a CD of the Albert Hall organ played by John Keys and recorded by Priory Records. 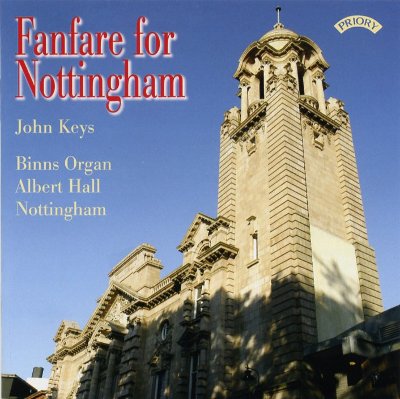 Its title piece is Naji Hakim’s Fanfare for Nottingham, written for the centenary of the Hall and its Organ. John Keys gave the centenary recital on this organ in 2010 and the music on the CD largely reflects that recital.

The rest of the programme demonstrates the purposes for which the organ was installed and the music current during the lifetime of its builder James Jepson Binns. There are two Wagner transcriptions: the Grand March from Tannhaüser and the Ride of the Valkyries, and two pieces written by Albert W Ketèlbey during the first decade of the Albert Hall organ’s existence: In A Monastery Garden (with Gentlemen of St Mary’s taking the part of the monks) and the picturesque In A Persian Market.

The Albert Hall’s first organist was Bernard Johnson, whose charming Canzonet is heard; it dates from 1911, the year Elgar came to Nottingham as conductor of the London Symphony Orchestra, and his visit is commemorated with a performance of his Salut d’Amour, in which John Keys is joined by violinist Anna Curzon.

J J Binns was greatly influenced by the German organ builder Edmund Schulze, and appropriately the CD features some major German organ music of the period. Schumann’s Four Sketches come over well on the organ, their moods ranging from the intimate to the magnificent. And one must have Reger, the Bavarian visionary whose great chorale fantasias show astonishing responses to the original Lutheran hymns. John Keys plays his Fantasia on the Advent Hymn “Wachet Auf” which certainly shows all the colours of this organ.

The centenary concert in 2010 concluded unforgettably with Karg-Elert’s Symphonic Canzona op 85 no. 3. It concludes this recording too, and John is joined by the same performers at the end: members of the Schola Cantorum of St Barnabas’s Cathedral and violinist Anna Curzon conclude a piece whose opening is majestic and whose ending is magical.

This CD is on sale at all Binns Organ concerts, and also from Classical CD at 10 Goose Gate NG1 1FF, the Albert Hall on North Circus Street NG1 5AA, and Windblowers at 75-77 Derby Road NG1 5BA.

It can also be obtained for £12 post free (in the UK) from: Ian Wells, 4A Kelvin Road, Thorneywood, Nottingham NG3 2PR (cheques payable to Binns Organ Trust).