James Jepson Binns (1855-1928) was one of the most successful and prolific of the numerous Yorkshire organ builders working at the turn of the 20th century. The firm’s most distinguished work was produced between the 1890s and the First World War. Binns was initially apprenticed to the Leeds firm of Radcliffe and Sagar, and from about 1873 to 1880 he worked for Abbott and Smith, latterly as head voicer. He established his Bramley Organ Works in 1880. The Revd Theodore Brocklehurst, writing his reminiscences of the organ builder in ‘The Organ’ quarterly, July 1929, reported that:

There was at that period a very fine musician in Leeds, namely J. W. Broughton, who had a Schulze chamber organ in his music room, which was tuned by Mr Binns on behalf of Messrs Abbott & Co. Mr Broughton became so interested in young Binns, that learning of his great ambition to start organ building on his own account, said to him: “If you can make a pipe and put it into one of the diapason stops so that I cannot detect the difference between your pipe and the rest, I think I might be able to put you in the way of starting.” This put Binns on his mettle, and the result was that he succeeded in pleasing Mr Broughton. The upshot was that Mr Broughton spoke to three or four wealthy Leeds men, and they advanced Binns the money to begin.

His work is characterised by sturdy – almost heavy – design and workmanship, and the solid construction of the organs earned them the nickname ‘battleship Binns’. There is a conservative continuity of style throughout the mainstream of the firm’s production, which draws heavily on the German influence which attracted so many northern organ builders in the latter half of the 19th century. There are particular similarities with the work of Kirtland & Jardine and Brindley & Foster – all devotees of the ‘Schulze’ school of thought. Binns wisely avoided the tonal and mechanical eccentricities which proved the downfall of many of his contemporaries but did invent an ingenious and entirely mechanical piston setter mechanism. He was acclaimed particularly for his flue-work including the Schulze-inspired diapasons, but his instruments never had the cachet of those by more prominent firms and his smaller church organs, built to standard stop lists, have been criticised on ground of dullness. But, as is amply proven by the Albert Hall organ, his best work was outstanding.

Many of Binns’ smaller organs still survive in churches throughout Britain but few of his larger organs remain intact. There is a four-manual, 53-stop instrument from 1912 at St Mary, Shrewsbury. Binns’ magnum opus, the organ at St. Nicholas, Great Yarmouth, was destroyed in World War II. Built in 1903, it had 66 stops on four manuals.

In 1903 a Mr G E Franklin installed a four manual 35 stop Binns organ in his residence ‘The Field’ in Derby at a cost of £3,500. In 1909 it was removed to Castlegate Congregational Church, Nottingham, now the Congregational Centre, where it still stands. According to W L Sumner in his article in the July 1971 edition of ‘The Organ’, the opening recital was given by Mr Bernard Johnson BA (Cantab) FRCO, then organist of Bridlington Priory, and “Mr Johnson’s playing so impressed Sir Jesse Boot, later the first Lord Trent, that the following year he bought an even larger Binns organ for the City of Nottingham and appointed Mr Johnson City Organist.”

Organ no. 552, a four manual 59 stop instrument, was erected in 1909 in the then Wesleyan Central Mission which was later renamed the Albert Hall. (An almost identical instrument was built for Rochdale Town Hall in 1913.) The instrument cost £4,500 and was financed by Jesse Boot (founder of the Boots Company) as a gift to the City of Nottingham, to be known as the City Organ.

Sir Jesse Boot (later Lord Trent) was a great philanthropist who devised and financed many projects for the benefit of his native Nottingham. He always took a great personal interest in these schemes, and the Binns Organ is one example of his close attention to detail. As a young man he had heard the Father Willis organ in St George’s Hall, Liverpool, and had vowed that if ever he became a rich man he would present a comparable instrument to the City of Nottingham. He was greatly impressed by the large Binns instrument housed in Castlegate Church and chose this builder for his new City Organ.

The specification was drawn up by C. W. Perkins (then organist of Birmingham Town Hall) and Revd Dr F Luke Wiseman (a Methodist minister and organist) in combination. The Italian and Spanish walnut casework was made in the Boots shopfitting workshop in Nottingham and the exquisite carving executed by Fitchett & Woollacott, Binns supplying the main timber framing.

The Albert Hall organ was one of the largest instruments that the firm produced, a well-appointed and versatile instrument well-suited to concert use. It has always enjoyed a distinguished reputation and its importance is increased by virtue of it remaining almost entirely unaltered. Its limitations stem from the tonal style and mechanical conventions of the period in which it was built, and are therefore part and parcel of its character for which no apology need be made.

In 1926 Brindley & Co. of Sheffield made minor tonal alterations to the organ which concerned only four of the soft accompanimental ranks, and did not affect the overall character and power of the instrument. These changes are detailed on the Specification page. In 1973 Henry Willis & Co. carried out cleaning and minor repairs.

Over the years the ravages of heavy use and industrial pollution began to take their toll on the instrument, exacerbated by the increased heating within the Hall. In 1987 the Hall was closed for three years and the organ lay silent. The resulting damp and dirt was followed by the disturbance of re-building work in the Hall. All this seemed to seal the fate of an already critically damaged instrument. However, enthused by comments such as this from 91-year-old William Rhodes writing to the Nottingham Evening Post, “I hope I am not too late to express my astonishment and amazement at the apparent lack of interest in keeping this ‘diamond in their midst'”, the Binns Organ Restoration Appeal Fund was founded. People were co-opted, cajoled and persuaded to help with their time, their efforts and their money. Donations poured in and work began in September 1992 under the guidance of organ consultant David Butterworth, who was subsequently appointed Custodian.

The Durham based firm of Harrison & Harrison were contracted to carry out a full restoration of the organ after exhaustive research. The restoration was largely compete by August 1993 which gave the organ time to “settle in” before the re-opening celebrations in October that year.

The instrument was played by Julian Rhodes in 1995 who reported: “it is simply magnificent. The main choruses have a leonine grandeur, and the soft stops are subtle and beautiful. The casework is walnut; the console is a sumptuous affair which perfectly prepares the performer for the unhurried response of the tubular-pneumatic action and the dignity of the tonal palette. This is Edwardian organ-building at its best.” 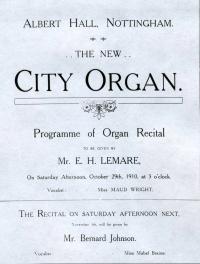 The inaugural recital was given by Mr Edwin Lemare on Saturday 29th October 1910 with a programme by J S Bach, Edward Horsman, Wagner, Bernard Johnson and Lemare himself. Lemare was to give a further six recitals at the Albert Hall, the last being in March 1911.

On Saturday 5th November 1910 Bernard Johnson gave his first recital at the Albert Hall. He had already been appointed Organist prior to the opening of the organ at Jesse Boot’s behest. The recital was to be the first of many weekend recitals by Johnson, given in the winter months right up to his retirement in 1934. They were characterised by the frequent inclusion of other instrumental or vocal soloists, and the incorporation in the programmes of concertos for both piano and other instruments, the orchestral parts being played by Johnson on the organ. After a few years the Saturday arrangement was found less than successful, and subsequent recitals were held to better effect on Sunday afternoons. After 1934 interest in the Albert Hall organ waned.

Between 1980 and 1985 interest in the Binns organ as a recital instrument was revived through a series of concerts organised by a local enthusiast Stephen Sherwin, involving artists both local and international. These included such celebrities as Ralph Downes, Carlo Curley, Nicholas Kynaston and Gillian Weir. In March 1986 David Butterworth gave the last two recitals before the closure of the Hall and its organ. Following restoration the organ was re-opened in October 1993 with recitals by Thomas Trotter, John Keys and Adrian Partington. A series of Sunday afternoon recitals by national and international recitalists has been given every year since then. Two stalwarts of this series have been David Butterworth and the late Kendrick Partington.

Kendrick Partington (1925-2014), who held the prestigious posts of director of music at St Peter’s Nottingham and head of music at Nottingham High School, played a high-profile role in keeping the long-silent organ before the public while spearheading fundraising efforts. With his colleague (the late) Leonard Webb he ensured that the blower and other electrics were restored through the Central Electricity Generating Board, after this serving on the board of the Binns Organ Trust, latterly as President. He gave several recitals on this organ himself, and attended a concert in which the organ was featured on the day before he died.

In early 1994 it had been decided to inaugurate an annual series of organ recitals to keep the Binns instrument before the public. David Butterworth, in his role as Custodian, immediately engaged seven soloists for that first season, beginning with Jennifer Bate and ending with Nicolas Kynaston. Until his retirement as Custodian in 2015 he continued to organise the annual series of recitals, simultaneously carrying out his role of caring for the organ itself. He has handed over a fine instrument in excellent condition for the enjoyment of future audiences.

Full accounts of the restoration of the Albert Hall, Nottingham organ can be found by Mark Venning (managing director of Harrison & Harrison) in vol. 18 (1994) of the Journal of the British Institute of Organ Studies, and by David Butterworth in Organists’ Review of May 1996.