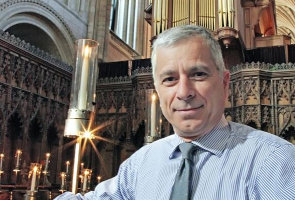 David Dunnett is Organist at Norwich Cathedral and was also previously Master of the Music there. After studying the organ with John Pryer and David Sanger he taught in America before spending six years as Assistant Director of Music at Uppingham School where he worked with Binns Organ Trustee Neil Page; he then went on to Winchester Cathedral as sub-organist before moving to Norwich in 1996.

He brings us a wide-ranging programme of original organ music and transcriptions, and there are some intriguing connections between the composers.   Alfred Hollins was “discovered” after a recital in what is now the Broadway Cinema;  he played to Widor, who was unimpressed, but went on to teach Eric Coates.   Coates was described as “the man who writes tunes”;  another accomplished tunesmith was the Belgian Joseph Jongen, whose lyrical Cantabile is contrasted with a sprightly but whimsical Menuet-Scherzo.   Mendelssohn played on the new organ at Birmingham Town Hall in 1837 and 1840;  a later City Organist who presided at that instrument, C W Perkins, was involved in designing the organ at the Albert Hall Nottingham.   The transcriptions come from a variety of sources:  Debussy from the piano, Vivaldi from a string orchestra, Walton from a jazz-age combo and finally Eric Coates from a full symphony orchestra confidently informing us who’s In Town Tonight.