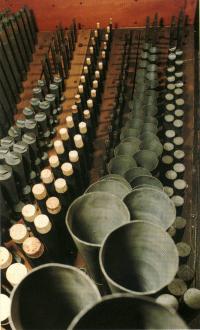 As a work of engineering the organ is a perfectly restored Edwardian period piece. Weighing 20 tons, this four manual instrument is operated by the builder’s own patent tubular pneumatic action. There are 58 speaking stops, 18 couplers and three tremulants. For convenience, the stops can be activated in groups by 23 pistons distributed over the five departments (four keyboards and the pedalboard) and most of these are instantly adjustable at the console by means of a mechanism which can only be described as remarkable for its time.

The organ has 3,515 pipes ranging in size from the smallest at 3/8 inch to the largest “Double Open Diapason” at a full 32 feet in length. They are made of either wood, zinc, or a lead/tin alloy. They may be open or stoppered at the top depending on the type of tone required. The majority of the organ’s pipes are flue pipes such as those in the facade, and they work on the same principle as the recorder. Sixteen of the stops however are made up of reed pipes. These are far more complex and, as their name implies, incorporate a vibrating brass reed.

The organ’s pneumatic action involves the use of narrow lead tubing to connect the console to all the working parts by means of compressed air. There is upwards of 2.5 miles of this tubing in the organ, each piece with its own specific task. The air for both the action and the pipework is contained within nine controlled bellows or reservoirs, and these in turn are supplied from the basement by two large centrifugal fan blowers. All the many thousands of moving parts are made of fine grained timber, brass wire and sheepskin leather. Except for the screws everything is hand crafted.

A unique instrument, the Binns Organ delivers an impressive range of tones. From the rich Diapasons, for which Binns was famous, to the delicate strings, flute and solo registers, through the reedy Oboe sound and Clarinet to the brassy Tuba. The sound produced by the Albert Hall organ is one of great warmth and richness. The unusual carillon stop with 32 real bells adds something rarely heard.