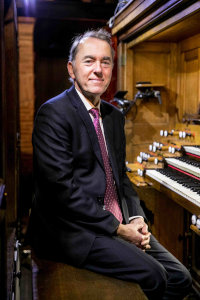 The organ in the Albert Hall was designed in conjunction with C W Perkins, city organist of Birmingham, and it is an immense pleasure to welcome Perkins’s latest successor at Birmingham, Thomas Trotter, to give this year’s Anniversary Recital. And it is a double pleasure, since Thomas Trotter gave the opening recital on the rebuilt Albert Hall organ in the autumn of 1993.

He begins with Bach’s monumental Fantasia and Fugue in G minor, its dramatic, indeed tragic, Fantasia followed by a bouncy fugue evidently based on a Dutch folksong. The rest of the first half is far more modern, the group of pieces called “Out of Africa” referring not to the Meryl Streep film of that name but to the origins of the music connected with that continent. Florence Price was an African-American composer who learnt the organ with Leo Sowerby and was associated with the renowned contralto Marian Anderson. Kevin Volans is a South African / Irish composer who studied with Karlheinz Stockhausen before beginning to explore indigenous African music. Fela Sowande was born in Nigeria and worked in both the UK (where he accompanied Vera Lynn’s first records on the BBC Theatre Organ) and the States.

John Gardner is well-known to carol audiences for Tomorrow Shall Be My Dancing Day, and there is no shortage of dances to end the first part of this recital. Saint-Saëns begins the second half in contemplative mood, and this is followed by his well-known Fantaisie no 1. Remaining in France we hear Maurice Duruflé’s sprightly tribute to his fellow composer Jehain Alain. Wagner transcriptions complete this Anniversary Recital, both of them appropriately by Edwin Lemare who opened this organ in October 1910. On that occasion he performed the Overture to Tannhaüser. This time we are to hear the Romance to the Evening Star (often called O Star of Eve) from the same opera, followed by the blockbuster Ride of the Valkyries.

The concert will begin at 2.45pm. To book in advance, go to: